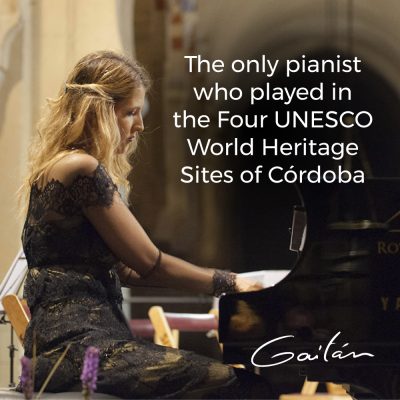 On Friday, December 6, 2019 from 6:00 p.m. to 7:30 p.m., Gaitán will host a formal piano concert for adults at the Cultural Center at Ponte Vedra Beach. This VIP performance will include a post reception with Spanish wine and tapas.

Gaitán gives a unique performance with a universal vision of Spain through the gestures of the musical movement and its most significant elements, such as dance, flamenco and the popular elements that make it unique. Each piece is evidence of these ingredients with an international language like a trip through the Iberian geography via the hand of composers such as Tturina, Isaac Albéniz, Enrique Granados, and Manuel de Falla. As the latter said in his “Piéces Espagnoles,” this work aims to show the “Spanish race.”

On Friday, December 6, 2019 from 6:00 p.m. to 7:30 p.m., Gaitán will host a formal piano concert for adults at the Cultural Center at Ponte Vedra Beach. This VIP performance will include a post reception with Spanish wine and tapas.

Proceeds from Gaitán’s three-day visit will benefit the Cultural Center’s educational and cultural programming and project La Florida, the interactive digital archive of the Americas.
“It stands out in each of its interpretations for its brilliant energy and unmistakably Spanish harmonies.” (ABC Journal, October 4, 2016).

Gaitán was the only pianist who played in the Four UNESCO World Heritage Sites of Córdoba, and received great critical acclaim and notable media coverage such as Antena 3 TV, Canal Sur TV, the Córdoba newspapers, and others.

About Maria Dolores Gaitán
Born in Villa del Río (Córdoba, Spain), she is internationally recognized for her energy and interpretative personality , and was chosen by EUNIC (European Union National Institutes for Culture) as a representative of Spanish musical culture to Italy. Additionally, she was nominated for the “Princess of Girona 2018 Foundation Award” by Carlos López Otín (National Research Prize “Ramón y Cajal) and awarded for her “3Tú” cultural management project.

Recently, Gaitán has distinguished herself as an artist “Marca España” (España Global) for her artistic quality research and as a representative of Spanish talent worldwide. In 2017, for her musical initiative, she received the “artistic recognition of the talent of the VIII Biennial of Art of Villa del Río” award.

She plays with great care and perseverance with renowned artists such as Mikhail Milman of the Kopelman Quartet, Sergey Teslya, of the Spanish National Orchestra, Camerata Orphica in Vienna, with Mario Hossen, Luisa Sello and Chiara Torselli, performing an intense chamber activity. Gaitán has played as a soloist, and on numerous occasions with the Córdoba Orchestra, City of Granada Orchestra, and the Tambov Symphony Orchestra of Russia, performing several premieres such as “Iquitum” by V.Sivilotti and “Capriccio Spagnolo” by D. Lorenzini.

She was the first pianist to create a musical show in the archaeological site of Medina Azahara, recently declared Unesco World Heritage 2018, an artistic conception of her making, performing the first score on the “Songs of Synagogue” by Maimonides. Gaitán made several world premieres including “Iquitum” by Valter Sivilotti and CapriccioSpagnolo by Danilo Lorenzini, performing this last composition in the Mosque of Córdoba.