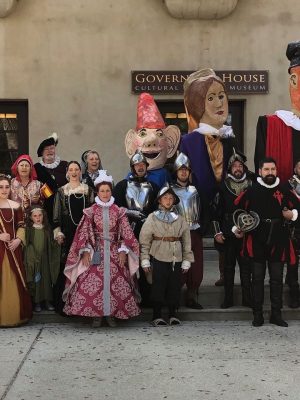 Presented by Historic Florida Militia at Fountain of Youth

Friday February 7th, 5:30 pm:  The “History on the Streets Saunter” is a free event featuring living history re-enactors, dressed in sixteenth century attire, who interact with visitors along St. George Street near the Colonial Quarter.

Saturday February 8th, 6:30 pm: The  “Noche de Festival” is a spectacular party showcasing the sights, sounds and tastes of St. Augustine’s Spanish heritage.  The event – held in the beautiful new Pavilion at the Fountain of Youth Archaeological Park – features Spanish tapas and sangria, traditional music and entertainment, and a dinner of Spanish paella prepared on site. Guests are encouraged to wear their finest Renaissance or cocktail attire. Tickets are $60 and available through eventbite.com.

Wednesday February 12th, 7:00 pm: The PBS documentary “The Secrets of Spanish Florida” will be shown on the big screen at Colonial Oaks at the Colonial Quarter.  This critically acclaimed film tells the story of how America really began, with the founding of St. Augustine: 42 years before Jamestown and 55 years before the Pilgrims landed on Plymouth Rock.  This show is free and open to the public with food and beverages available for purchase.

Friday February 14th: The Historic Florida Militia participates in St. Augustine’s official Wreath Laying Ceremony at the Statue of Pedro Menendez in front of the Lightner Museum.  This event is free and open to the public.

Friday February 14th, 5:30 pm: “History on the Streets Saunter” in the Colonial Quarter.  Free and open to the public.

Saturday February 15th, 10 am to 5 pm: “School of the Sixteenth Century” is held in the Colonial Quarter at 33 Saint George Street.  Visitors are immersed in life as it was in Saint Augustine in 1565.  Historically dressed re-enactors demonstrate military and civilian activities.  See and hear our Soldados shoot the matchlock Arquebus, the predecessor of the musket;  participate in pike pushes and sword fighting; and enjoy displays of period appropriate blacksmithing, cooking, jewelry making, textiles and clothing.

Tickets for the Noche de Festival are available on eventbrite.

All other events are free and open to the public.