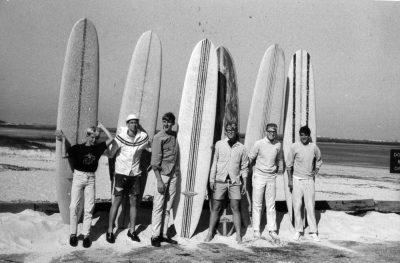 St. Augustine boasts hundreds of years of recorded history as the first permanent European-settled city in what would become the United States. With much focus dedicated to its Spanish heritage and Henry Flagler’s legacy, other St. Augustinian cultural phenomena are often overlooked. After finding an article in the St. Augustine Record dated 1915 that references surfing, the St. Augustine Historical Society realized that one of our favorite pastimes was far older than we thought.

As a result in 2019, the St. Augustine Historical Society initiated dialog with the large local surfing community that catches the waves at breaks such as Vilano Beach, the St. Augustine Pier, Blowhole, and Matanzas Inlet. Historical Society staff conducted and recorded oral history interviews with various local surfers, collecting dozens of narratives and hundreds of surf stories. These interviews were transcribed, packaged, and delivered back to the interviewees, and word spread quickly. As time went on, interviewees began offering their photographs and surfboards to accompany their words and tell more of their stories. Soon, there was more than enough material to design a museum dedicated solely to St. Augustine surf culture and history.

The Tovar House on Historical Society grounds will serve as the site of this museum. Donations continued to pour in, everything from photographs, art, surfboards, trophies, decals, and more. Local surf shops offered their support as well. With generous monetary donations, a huge team effort, and the help of an exhibit designer, plans for the St. Augustine Surf Culture Museum began to take shape. The St. Augustine Surf Culture Museum opened on May 14, 2021, and it incorporates all aspects of the vast collection.

The goal of this project is to highlight this important part of St. Augustine's culture and to give local surfers a place to see themselves in the broader narrative of our city’s history. The resulting museum and online archives are the culmination of everyone’s contributions. The St. Augustine Surf Archive is an effort to organize and present the items as they relate to the St. Augustine Surf Culture Museum.