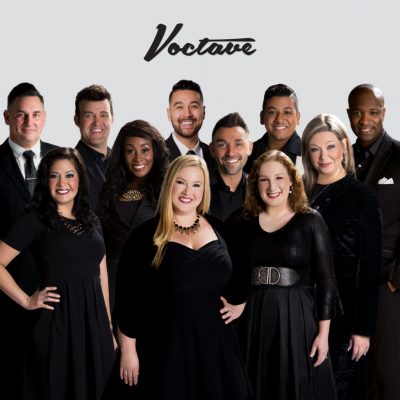 Voctave – An a Cappella Sensation

The EMMA Concert Association is proud to announce the first concert of its 43rd Season. Voctave — an a Cappella Sensation — will be on stage from 7:30-9:30 PM on Saturday, September 11, 2021 at Lewis Auditorium, 14 Granada Street, downtown St. Augustine.

A cappella sensation Voctave has had over 150 million online views of their videos, and their latest album, The Corner of Broadway & Main Street Vol. 2, debuted at number 3 on the iTunes charts. Formed in 2015 by producer and arranger Jamey Ray, the voices that bring their arrangements to life represent a wealth of diverse backgrounds and musical experiences.

Hailing from Central Florida, the eleven members of Voctave have performed across the globe and appear on countless recordings.

The group has performed with GRAMMY, Dove, and American Music Award recipients including Sandi Patty, Pentatonix's Kirstin Maldonado, Mark Lowry, David Phelps, and Jody McBrayer. With multiple #1 songs and albums on iTunes, Amazon, and Spotify, Voctave has also ranked in the top 25 on Billboard Magazine’s charts. Voctave’s seven albums are digitally available on all platforms.

“We are excited to bring beautiful live music back to our beautiful city,” said Joanne Everett, President of EMMA Board of Directors.

Tickets are $50 per guest and include parking and a shuttle to and from the venue. Parking will not be available at Lewis Auditorium at Flagler College for this concert. Parking will take place at the St. Johns County Council on Aging, 180 Marine Street, St. Augustine Florida. Guests will then be transported to and from the concert venue by shuttle service. Student tickets are available for $10 with student ID, and children’s tickets are also $10 per child.

Started by a small group of music lovers in April 1979, the organization was named after a famous Spanish cellist, Emil Maestre, who retired to St. Augustine. EMMA is a nonprofit all-volunteer organization with the mission to produce quality music and dance performances at modest ticket prices. In 1989, the EMMA Board of Directors formed the EMMA Guild. The board and the Guild work hand-in-hand to produce one successful concert after another. Since 1993, Lewis Auditorium at Flagler College has been the home for EMMA’s concerts.