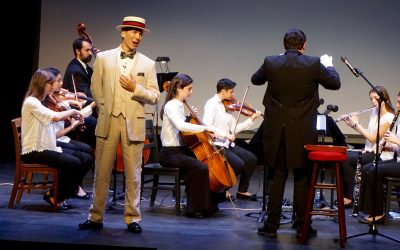 The EMMA Concert Association is proud to announce the second concert of its 43rd Season. Peacherine Ragtime will be on stage from 7:30-9:30 PM on Saturday, October 2, 2021 at Lewis Auditorium, 14 Granada Street, downtown St. Augustine.

The Peacherine Ragtime Society Orchestra is “the premier American ragtime ensemble,” recreating the syncopated stylings of a bygone era – Ragtime, Theater, and Dance music, along with underscoring classic silent films. Programs highlight the music of the late 1800s and early 1900s, with selections by composers such as Irving Berlin, George Gershwin, W.C. Handy, Eubie Blake, George M. Cohan, and of course, the King of Ragtime, Scott Joplin. Their silent film programs feature the biggest names of the day (Charlie Chaplin, Buster Keaton, Harold Lloyd Laurel & Hardy, Douglas Fairbanks, and more), and have earned them worldwide recognition and fame.

“We are excited to bring beautiful live music back to our beautiful city,” said Joanne Everett, President of EMMA Board of Directors.

Tickets are $50 per guest and include parking and a shuttle to and from the venue. Parking will not be available at Lewis Auditorium at Flagler College for this concert. Parking will take place at the St. Johns County Council on Aging, 180 Marine Street, St. Augustine Florida. Guests will then be transported to and from the concert venue by shuttle service. Student tickets are available for $10 with student ID, and children’s tickets are also $10 per child.

Started by a small group of music lovers in April 1979, the organization was named after a famous Spanish cellist, Emil Maestre, who retired to St. Augustine. EMMA is a nonprofit all-volunteer organization with the mission to produce quality music and dance performances at modest ticket prices. In 1989, the EMMA Board of Directors formed the EMMA Guild. The board and the Guild work hand-in-hand to produce one successful concert after another. Since 1993, Lewis Auditorium at Flagler College has been the home for EMMA’s concerts.