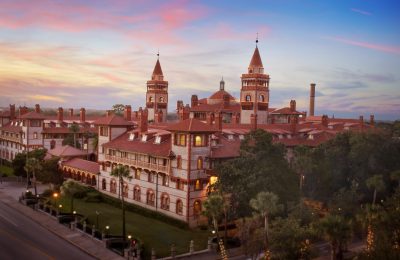 Legacy Tours highlight the architectural heritage of the former Hotel Ponce de Leon, a nationally designated historic landmark building, built by Henry Flagler in 1888. Millionaire industrialist/developer Henry Morrison Flagler envisioned creating an American Riviera in St. Augustine and the Hotel Ponce de Leon, now Flagler College, has recaptured the architectural spirit of old Europe. The Hotel is as prestigious now as it was in 1888. This beautiful Spanish Revival structure represents proof that preserving the past is compatible with modern urban life.

Flagler spared no expense on the interior opulence of the Hotel. Louis Comfort Tiffany was the interior designer, and his legacy continues in the many beautiful stained glass windows of the Dining Hall, which along with the Flagler Room have both been restored for more than it cost to build the property 100 years ago.

The tour begins in the Rotunda, a 64-foot domed ceiling supported by eight ornately carved oak pillars. The interior dome displays stunning murals by George Maynard. The 800 seat Dining Hall boasts an elliptical barrel-vaulted ceiling, pierced with Tiffany stained-glass windows, musicians’ galleries, and carved oak chairs imported from Austria. Today students casually take their meals seated on these chairs in this exquisite environment. The graceful angels in the dining hall represent the four seasons, and the majestic Spanish galleon under full sail is George Maynard’s rendition of the one that brought Ponce de Leon to the land of flowers in search of the Fountain of Youth.

The Flagler room was initially the Grand Parlor of the Hotel. Angelic canvases by Virgilio Tojetti, carved wood, imported marble, oriental carpets, ornate furniture, exquisite vases, and beautiful paintings accentuate the interior. Also adorning the room are Tiffany Austrian crystal chandeliers, a massive onyx Thomas Edison clock, one of the first ever to be used in a public building, and a historical photo gallery of the Flagler family.