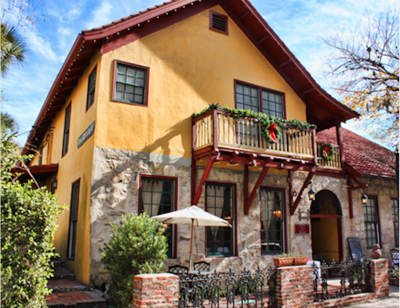 Our Inn is located in the heart of the historic area. We have on-site parking so you can park your car and walk to all downtown historic attractions, or hop on the tour trolleys which stop in the Lightner Museum gardens directly across the street.  We also have bicycles for our guests’ use. A complimentary full breakfast is served in our restaurant every morning between 8:30 and 10:00 am.  Complimentary cheese and wine are served on the upper deck on weekends and a glass of wine in our cozy bar on weekdays each evening between 5:30 and 6:30 pm.

This area of the walled Colonial City has been continuously occupied since the 16th century and represents the location of the original 1565 settlement of St. Augustine. All structures in the area were destroyed during the 1702 attack by the South Carolinians. However, by the mid-1700s the Rosario defense line had been erected along the street we’re now on (Cordova St.) and extended through the Old City House property.

The Old City House, originally constructed in 1873, is an excellent example of Spanish Colonial Revival architecture. The coquina stone facade on the Old City House was built from coquina found on the site, probable remnants from the Sentry station which existed here to guard the S-W corner of the walled city. Legend has it that a ghost of a Spanish Soldier still guards the archway, unaware that he was killed by the misfire of his own musket.

Holmes Ammidown (1801-1883), a wealthy merchant from Boston and New York built the Ammidown Mansion where the parking lot now is, and the Old City House originally served as it’s stable. When the mansion was destroyed by fire, the stable served the Flagler hotels.

For the last 10 years, Old City House has been a B&B and renowned restaurant and has just undergone significant renovations to the rooms and restaurant to recapture its Mediterranean feel. The rooms now reflect romantic “Old Cities” such as Venice and Paris as well as themes of “Out of Africa” and “Passage to India.”