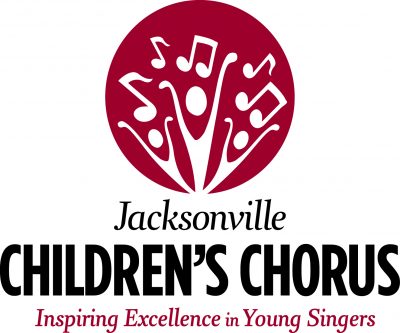 The Jacksonville Children’s Chorus (JCC) was founded in 1995 at Jacksonville University to fill a need for a children’s music program in the area. Led by Dr. Frances B. Kinne, then Jacksonville University president, the plan to create a local choir was implemented by Dr. Jon O. Carlson and Jim Taylor, who served as the first conductor. In that first year, JCC had only 16 voices. Since then, it has grown to a membership of more than 350 singers participating in five choirs.

JCC faced many challenges because it was a small arts organization with little financial support or visibility in the community. JCC gained name recognition in 2001, when it was named the designated children’s chorus of the Jacksonville Symphony Orchestra (JSO). To ensure diversity among its members, in 1998 JCC established a scholarship program to provide financial assistance to those families who cannot afford tuition. This year, more than 35% of the singers receive either partial or full scholarships.

In 2003, JCC created the annual First Coast Honors Choir Festival, a daylong event for area fourth through sixth grade students. A guest clinician is invited to conduct the Honors Choir, which is assembled from students who have been recommended by their music teachers from Jacksonville’s 160 public and private schools. In conjunction with this event, JCC hosts a free Midwinter Music Workshop for area school music teachers.

The Board of Directors appointed Darren Dailey as the Artistic and Executive Director in 2006. Since that time, JCC has expanded its choir programs, and has developed self-produced, sold-out concerts including the annual Martin Luther King, Jr. “Lift Ev’ry Voice and Sing” event, the annual Cool Side of Yuletide holiday concert and concerts featuring guest artists such as Amy Grant, Voca People, Kristin Chenoweth and Audra McDonald. In his 10th Anniversary year of 2016, Darren Dailey was appointed as President and Artistic Director.

As JCC grows, it has created new choirs and new opportunities for its singers. The Young Men’s Chorus, established in 2011, is designed to meet the specific needs of young men who are experiencing voice expansion. The Touring Choir, established in 2011, travels nationally or internationally in the summer after a year of hard work and performances. From 16 singers in 1995, JCC has developed into one of Jacksonville’s most important providers of music education, enriching the lives of singers and audiences across the region.