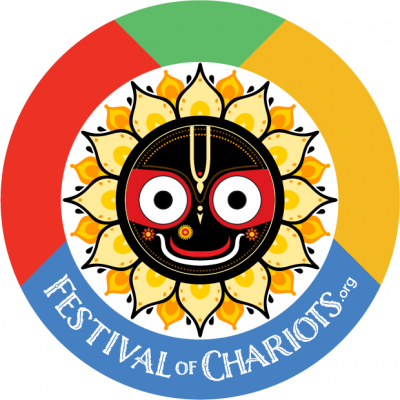 Festival of Chariots is an ancient multi-cultural parade and Bhakti yoga wellness festival founded on the traditions of India. Bhakti yoga is the yoga of love.

If you’ve ever dreamed of visiting exotic places, we have a treat for you. GET A TASTE THE EAST without leaving Florida! The event includes entertainment, live music, singing, dance, drama, healthy living booths, bazaar, yoga classes, healing arts workshops, and healthy vegetarian food.

Festival of Chariots is the world’s oldest known parade. The most unique feature is a huge 25 ft tall, brightly colored chariot ornately decorated with swans, lotus flowers, flags, and auspicious symbols. The chariot has 100 ft long ropes that are pulled by anyone who wants to join in, propelling the chariot along the beach. Riding on the Chariot is the Lord of the Universe, encouraging everyone to come together and celebrate life, peace, and well-being while uplifting our consciousness. Accompanying the parade is spiritually inspired kirtan music and dancing, backed by exotic drums and hand cymbals.

It’s an ecstatic, exciting event, a vision from another world!

The Founder/Acharya, His Divine Grace AC Bhaktivedanta Swami Prabhupada came to America in 1965 at the age of 70 and introduced the timeless tradition of the Festival of Chariots (known as Ratha Yatra) to the West. His vision was to inspire people from all walks of life towards a peaceful, spiritual society. The festival has attracted millions of people during its annual celebrations in major cities around the world. Over 10,000 plates of vegetarian food are served free of charge between the nine festivals held each year in the state of Florida: Miami, Jacksonville Beach, Tallahassee, Orlando, Tampa, Gainesville, Daytona Beach, Clearwater Beach, and St. Augustine.