Chef Brian Whittington doesn’t just serve up Southern hospitality at the acclaimed Preserved restaurant, he also focuses on sustainability, local sourcing, and a zero tolerance for waste. In our interview, we had the opportunity to…

Chef Brian Whittington doesn’t just serve up Southern hospitality at the acclaimed Preserved restaurant, he also focuses on sustainability, local sourcing, and a zero tolerance for waste. In our interview, we had the opportunity to speak to him about his history and passion for St. Augustine, and get an inside look at each of his three St. Augustine Historic District locations, including the Preserved restaurant.

What is it about St. Augustine that has made this your home?

I moved here in 1997. My parent’s moved from right outside Chicago, Illinois, and I was at the age where I had to move. After high school, I graduated and immediately went to culinary school. When I moved back to St. Augustine, my family all moved back up North and I stayed. I love St. Augustine. It’s got a lot of Southern influences, which is one of the things I’m extremely attracted to. Coming from the Midwest, you’re used to farms, you’re used to working with farmers, and things like that. The South is very much in love with dealing directly with farmers.

What is your relationship with St. Augustine, as far as the community goes?

We’re extremely involved in the St. Augustine historic district of Lincolnville. When I originally came back into town, I was offered an opportunity to be in the building that we’re in now. The intriguing thing to me was the amount of history that I learned about this area. St. Augustine is known for a lot of rich history, but a lot of people don’t really recognize the amount of history that’s happening in Lincolnville that was here in the past and is still here today.

Awesome. Do you want to talk about the history behind the buildings? 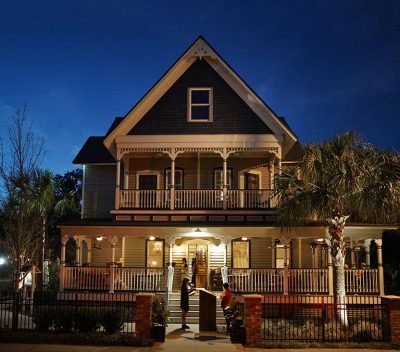 This building is known as the Jefferson House. It dates all the way back to the 1840s, it was Thomas Jefferson’s great-granddaughter’s house. When we took it over, 30 percent of the building could be saved. We had a lot of city architects that came in and engineers — the goal was to be able to keep the same shape of the building. The building had to be lifted from the back of the property and slowly moved to the front with a new foundation built underneath it, and then the same shape kept with an all-new engineered outside. The goal was to be able to preserve as much of the building as possible.

There were some pretty interesting things that we found throughout the process. There were wood boards that had the initials of T.J., Thomas Jefferson, which was pretty crazy. We found a letter that was from his great-granddaughter. The logo of Preserved, the actual letters, are Thomas Jefferson’s great-granddaughter’s handwriting. There’s just so much history in this building. It’s one of the reasons why I think so many people love what we’re doing here, not just that we do really solid food and have really good service, but the history that’s behind it.

You have mentioned approachable Southern and French technique. Can you explain what those mean to you?

To me, we’re looked at as an upscale restaurant. What we really try to do here is highlight that we are in the South, but the South is pretty well known for hospitality, and that means that we’re striving as much as possible to make you feel comfortable when you’re in our space. When you’re in our restaurant, the goal is to be able to make you comfortable, but then also to present you with food that you may be used to or that you’ve seen before, but then seeing it done in a way that’s a little bit more refined, or at least using the correct cooking technique.

You’ll see us doing a lot of things that are staples of French cooking like braising or long-cooking processes or starting off stocks. Everything that we do is starting off with chicken bones or beef bones or even going into produce, we make corn stock and pork stock. A lot of the things that we do are based off of French fundamentals and then highlighting what’s going on in the South.

You have a fascinating story with all three locations – how do they tie together?

It’s fascinating to have three locations. And, by fascinating I mean tough at times. We started off with a very simplistic café, then moved back into town, opened up Preserved, which was received very well and had very rapid growth. Then in 2017, we turned the first location into the barbecue spot to be able to make it tie in to the restaurant group. We then had fine dining and also a more approachable, relaxed location that did really solid barbecue.

The community was always talking about the old butcher shop. We had people that were coming in all the time and asking, “Can we buy beef from you? Can we buy pork from you?” We just really couldn’t do it at the time, so out of necessity for the community as well as for our restaurant group, the natural next step was being able to go into a butcher shop.

The foundation that we have here is using things fully. Being sustainable means that you’ve got to be able to go to a farmer and say, “Hey, I don’t just want the pork chops off of your pig, but I want the entire pig.” That builds a relationship, I’m going to figure out a way to be able to utilize the entire product.

If you could pull people from out of town to come in town, what would you tell them to come here, or to one of your locations?

I would probably start off by explaining to them the style of food that we do here, but also trying to get them to connect to the amount of effort that is put into it by the entire staff.

We want to connect to Southern hospitality and making you feel comfortable, but then also highlight why we source locally and the amount of time and effort that goes into that.

For any upcoming chefs what advice would you give to them?

As far as advice to young chefs, I think the best thing to do is to be extremely honest. Know that it is an industry that can teach you a lot, but you’ve got to be humble and you’ve got to understand that you’re going to start off in a space that’s extremely difficult. If you can make it through that process, you’re going to respect it a lot more when you come out on the other side.

Click here to learn more about farm-to-table dining in the St. Augustine Historic District and around the region.