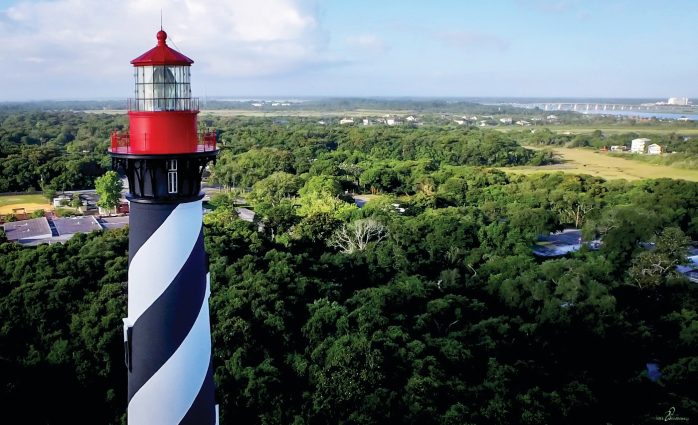 Explore the St. Augustine Lighthouse and Maritime Museum This beloved black-and-white-striped lighthouse turns 145 in 2019 but its fascinating history dates back more than 400 years. Its Florida’s very first lighthouse and, along with the…

This beloved black-and-white-striped lighthouse turns 145 in 2019 but its fascinating history dates back more than 400 years. Its Florida’s very first lighthouse and, along with the structures that preceded it, the oldest permanent aid to navigation in North America.

It has been the site of battles and picnics. Confederate soldiers hid its lens during the Civil War. During WWII, it was occupied by armed guards. It has seen tragic fires and passionate restoration. It may be haunted by four different ghosts. It’s a gathering place and guiding point for St. Augustine.

Featured on the National Registry of Historic Places, the museum and beautiful grounds are essential to your St. Augustine experience—even if you are not brave enough to climb all 219 stairs to the top of the tower. Before you visit, here’s bit of the history and folklore mysteries surrounding this iconic landmark.

First built in 1589 by Spain, the tower was under Spanish rule twice for a total of 211 years. The British took control for 20 years following the Revolutionary War. In 1821, Spain ceded Florida to the United States who has maintained ownership ever since.

The Spanish built the wooden watchtower on Anastasia Island to watch for approaching enemy ships, but it also aided their own ships struggling to enter the harbor. Shipwrecks were common as captains had to navigate past challenging sand bars through storms and rough seas using sight alone. The height of the original wooden watchtower is unknown, but a second watchtower was built in the early 1700s with a height of 30 feet. This structure stood for nearly 140 years. When the British took ownership in 1764, the watchtower was raised to 60 feet and a “signal” added to the top, believed to be the first light. In 1821, with Florida is ceded to the US, the tower is raised to 70 feet. A new lamp and lens is ordered. However, the Confederate Army hid the new lens during the war. When the US Navy peacefully took back St. Augustine the lens was found and re-installed.

By 1867, natural changes to the island inlet caused increasing water levels. The original light station tower was doomed to erosion and a new site was selected. The remains of this earlier tower can still be seen during low tides.

In 1871, the US Congress approved funding for a new lighthouse and construction began on the 165-ft tower that is still used today. The lamp was first lit by the lighthouse keeper on October 15th, 1874. It was originally fueled by whale oil and then kerosene. Powered by electricity today, the lighthouse still uses the same 145-year-old lens. It is capable of casting a beam of light up to 24 nautical miles. 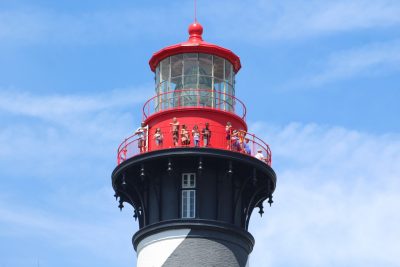 The St. Augustine Lighthouse has been a bright spot in St. Augustine for 145 years, drawing locals and tourists to enjoy the beautiful grounds and spectacular views. Throughout the late 1800s and early 1900s, the wealthy guests of Henry Flagler’s hotels visited the island by horse-drawn cart or by rowboat for day excursions and tea.

During World War II, the site served a strategic purpose. The US Coast Guard was stationed at the Lighthouse to watch the sea 24 hours a day. German U-Boat 123 torpedoed the American steam tanker, SS Gulf America, off Jacksonville, FL. The German Captain had followed the tanker North from Vilano but noted in his logbook “the slender lighthouse” he had used as his guide point along this coast. Thousands of veterans’ artifacts are preserved by the Museum from this period of time.

Throughout the 1990s and 2000s, the lighthouse gained national attention for “sightings” within the building. Stories of shadowy figures and unexplained noises have been told, along with the true stories of deaths at the lighthouse. There are documented reports of a light keeper who fell to his death while painting the tower in 1859, and a tragic accident resulting in the deaths of three children during construction of the tower in 1873. The lighthouse has been featured on ghost hunting shows including Buzzfeed Paranormal and Ghost Hunters.

In 2001, Museum archaeologists recorded the foundations of the first lighthouse tower as well as of a series of British shipwrecks just offshore of Anastasia. They are currently working under a permit from the State of Florida to excavate artifacts from the remains of the shipwrecks so the next historically significant discovery could happen today.

These exhibits share remarkable maritime stories beginning with Ponce de Leon’s first sighting of Florida in 1513 to the worldwide shrimping industry that began in northeast Florida in the early 20th century.

At the Keeper’s House, see a day in the life of a lighthouse keeper and his family in the 1880s. Hear the stories of the Harn Family in residence from 1875 to 1889. See how the keeper’s tools helped him with daily routine. For a more in-depth visit, you can schedule a personal tour by the St. Augustine’s Lighthouse Keeper himself. Hear the fascinating stories of what it was like as a lighthouse keeper of the past and what it is today. 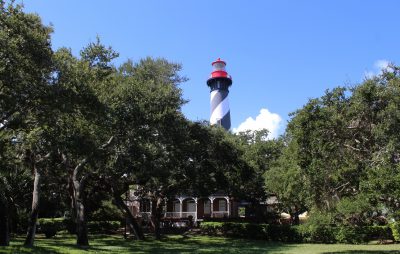 Be sure to visit “WRECKED!” the fascinating Revolutionary War shipwreck exhibit

Discover the role St. Augustine played in the Revolutionary War, learn how underwater archeologists locate historic shipwrecks on the ocean floor and hear stories behind artifacts from 1782.

And, don’t miss the excavated items on display in the Museum Conservation Lab. 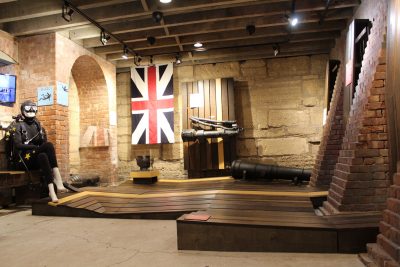 Stroll through the Historic Site and Grounds. Visit the Heritage Boatworks to see how wooden craft built today by Museum volunteers are based on actual historic documents, tools and materials. Walk the Maritime Hammock Nature Trials and see the native plants and animals lighthouse keepers’ and their families used and how they impacted their daily lives. 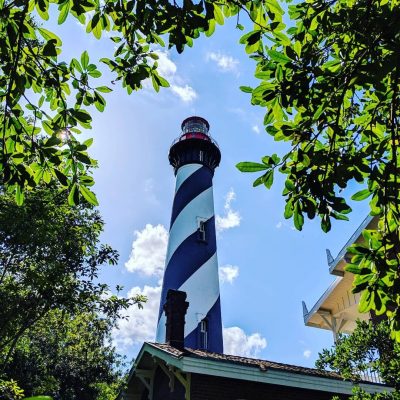 Step into the WWII Era

Explore Home Front St. Augustine in the WW11-era garage. The US Coast Guard turned the Keeper’s garage into a jeep maintenance garage while they were stationed here during the war. While you’re there, enjoy a quick bite at the WWII-themed eatery, Tin Pickle, Local Gedunk (a.k.a. canteen) 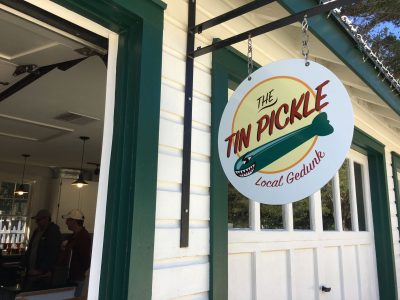 Check out these Lighthouse Specialty Tours 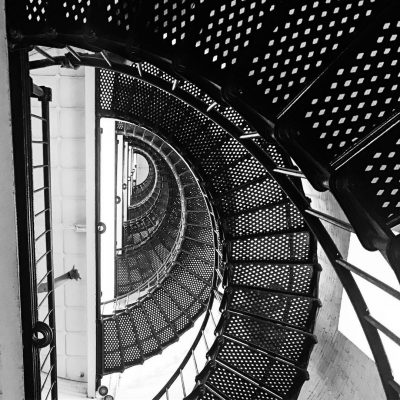 The Dark of the Moon Tour

You not only hear spooky stories based on real history in the lighthouse at night, you also help us investigate our maritime past.  It includes a guided talk through the 1876 Keepers’ House and the 1874 St. Augustine Lighthouse tower.  Your guide will share true tales from the history of our Light Station.

Once a month, guests are treated to a spectacular view of Mother Nature’s nightly changing of the guard. From your vantage point on top of the lighthouse tower, you can watch the sun disappear behind historic St. Augustine while the full moon ascends from the Atlantic horizon. In addition to the breathtaking view, guests are treated to complimentary champagne from San Sebastian Winery and hors d’oeuvres from The Reef Restaurant. 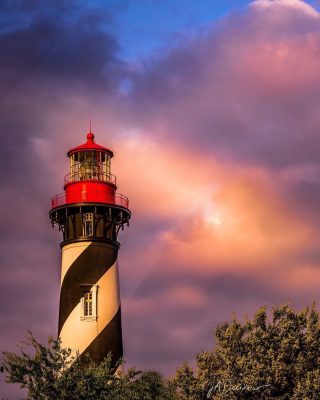 One hundred and sixty-five feet above the ground, our original 1874 first-order, Fresnel lens still shines out over St. Augustine night and day. This gorgeous, handmade marvel of scientific engineering and artistry is nine feet tall, weighs two tons, and is composed of more than 370 handmade glass prisms. 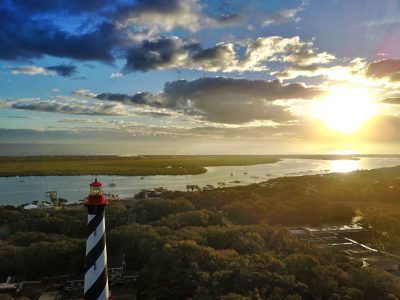