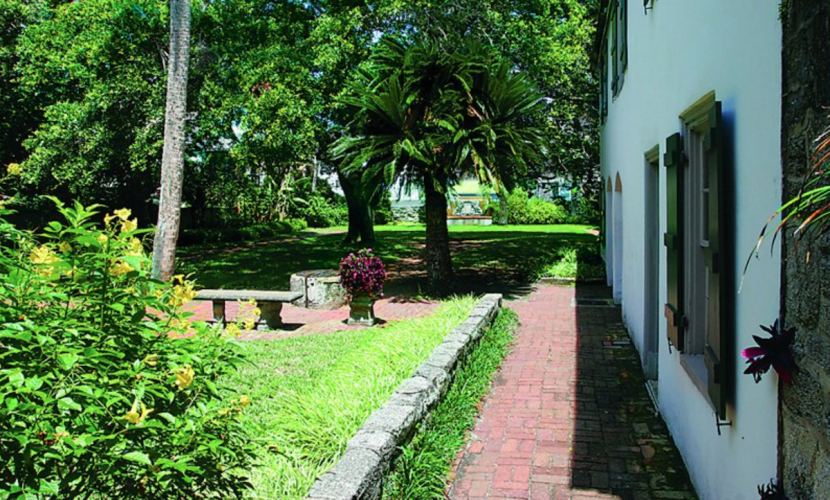 Ximenez-Fatio House Museum The Ximenez-Fatio House was built by Spanish storekeeper Andres Ximenez in 1798 during Florida’s Second Spanish Period. Following his death, it became a boarding house during the Seminole Wars (1817-1858), owned first… 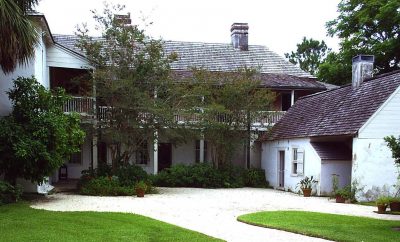 The Ximenez-Fatio House was built by Spanish storekeeper Andres Ximenez in 1798 during Florida’s Second Spanish Period. Following his death, it became a boarding house during the Seminole Wars (1817-1858), owned first by Margaret Cook and then Sarah Petty Anderson. In 1855, it was purchased by Louisa Fatio and architectural evidence shows that it was renovated in her first few years of ownership, resulting in a spacious two-story boarding house. The museum today depicts a fashionable early 19th-century inn. Each room tells a story about guests who stayed and how they experienced the Ancient City.

Guided tours include fascinating stories that happened during this lesser-known period in Florida history. The historic property in on the National Register of Historic Places and is designated as a Florida Heritage Landmark. Archaeological finds include a Caravaca Cross, an intricate white bronze double-barred cross which dates to 17th century Spain, and antique “Bandana” China from a pattern that belonged to owner Sarah Petty Anderson. A silver button and a large cache of pins and buttons were discovered beneath a foundation that may have been a laundry shed. Pre-Columbian artifacts found on the property show evidence of an ancient Timucuan settlement that predates the house by thousands of years. 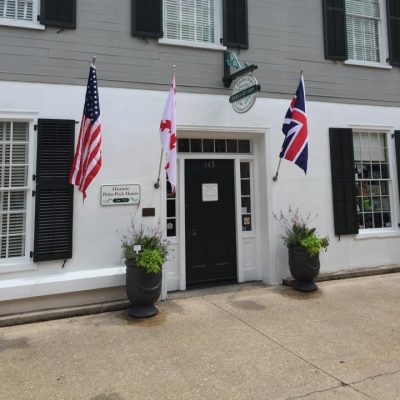 Built in 1750 for a Royal Spanish Treasurer and then occupied by the Peck family descendants until 1931, the Peña-Peck House is one of the oldest colonial buildings in St. Augustine. King Ferdinand VI ordered the home built for Spanish Royal Treasurer Juan Estevan de Peña and his wife Maria Antonia Adrisola. The Peña’s “love affair” with their home ended abruptly in 1763 when Spain ceded Florida to Great Britain in exchange for Havana in the Treaty of Paris. During British occupation, it became home to two governors: John Moultrie and Patrick Tonyn. During the Second Spanish Period (1763-1821), Florida’s first cattle rancher, Francisco Xavier Sanchez, a St. Augustine native and American Patriot during the Revolutionary War, bought the house in 1791. His widow Maria del Carmen Hill Sanchez and her heirs owned it until 1821.

Dr. Seth Peck and his family added a second story wooden addition, a “modern” kitchen, a new doctor’s office, and a general store. Peck’s granddaughter, Anna Gardner Burt, died in 1931 and left her house, furnishings, priceless antiques, and artwork in a trust to the City of St. Augustine with instructions that it must be “maintained as an example of the old antebellum homes of the South.” The Woman’s Exchange of St. Augustine stepped in and opened the house for tours on May 1, 1932, and began operating the Woman’s Exchange gift shop in this new location. Visitors can take daily guided tours and view the historic home featuring 19th-century art and antique furnishings. 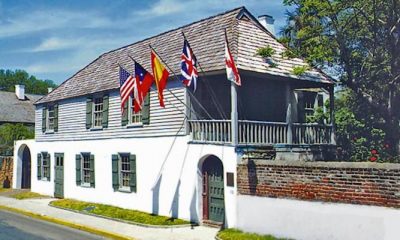 The Oldest House Museum Complex is owned and operated by the St. Augustine Historical Society. Visitors can experience an interactive guided tour of the Gonzalez-Alvarez House, a National Historic Landmark which is the oldest surviving Spanish colonial dwelling in St. Augustine. While archaeological evidence exists that the site had been occupied since the 1600s, the present house dates to the early 1700s. Construction began around 1723 and it reached its final form in 1790, exhibiting Spanish and British Colonial architectural styles. The house reveals evidence of the First and Second Spanish periods, British, and American occupations.

Docents explain the daily lives of the settlers and foster discussions on building use, archaeology, lifestyle, and culture on the Florida frontier. Guests can experience a guided tour of Florida’s Oldest House, the history museum, ornamental gardens, a rotating exhibit gallery, and the museum store.

The Lincolnville Museum and Cultural Center opened in 2007 in the historic Excelsior School building, the first high school for African Americans in St. Augustine. Built in 1925, the Excelsior sits in the heart of the Lincolnville Historic District, which has many Civil Rights era sites and markers. The museum’s exhibits and storylines show the comprehensive heritage of more than 450 years of African Americans in the Nation’s Oldest City through photos, artifacts, and oral histories. 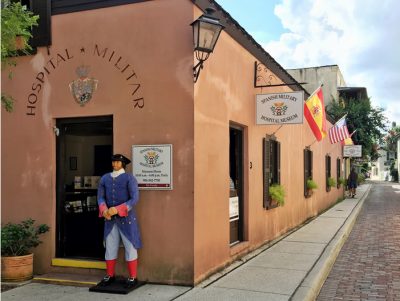 Travel back in time as this pet-friendly museum takes guests to the Colonial Spanish days of medicine. The doctor is always in at this Second Spanish Period location where guided tours include an interactive experience with an apothecary creating medicines and explaining how colonial herbs were the origins of some of the most popular medicines that we use today. This journey to the past begins as a skilled surgeon performs surgical demonstrations. 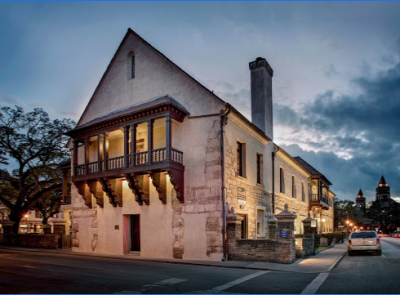 Since 1598, a government building has stood on this site with a view of the St. Augustine bayfront, accommodating colonial governors appointed by the Crowns of Spain, then Britain, then Spain again. In 1821, after Spain ceded Florida to the United States, this current Government House served as a courthouse and briefly as the Capitol of the new Territory of Florida. The Governor’s House Cultural Center and Museum overlooks the historic Plaza de la Constitución. An exhibit in the grand lobby follows this history including a timeline to present-day.

The O’Reilly House was built in 1691 during the First Spanish Period here in St. Augustine. It is known as the House of Don Lorenzo de Leon, but officially as the Father Miguel O’Reilly House Museum. Just like the Castillo de San Marcos, it’s built with tabby and coquina. Miguel O’Reilly, an Irish priest in the service of the Spanish crown, bought the property in 1785 at the beginning of the Second Spanish Period, and it was used as the parish rectory.

From 1794 to 1802, Father O’Reilly privately taught a student who would go on to become a brilliant educator, author, defender of human and civil rights, and, most notably, a humble priest — Father Felix Varela. He is known for his tireless work on behalf of the Irish immigrants in 19th century New York City. Father O’Reilly ensured that the house would continue as a place of spirituality and learning long after his death. Since 1866, the guardians of this sacred and historic space have been the Sisters of St. Joseph who were recruited from France by then Bishop of Savannah, Augustin Verot, who would later become the first Bishop of St. Augustine.

On the National Register of Historic Places, The Father O’Reilly House Museum is in the oldest continuously settled section of the city of St. Augustine. This section of the city was part of the original 1565 settlement established by founder Pedro Menendez de Aviles. The museum has three main themes: The story of the house, the Catholic tradition in St. Augustine, and the Sisters of St. Joseph who have been the guardians of the O’Reilly House since 1866. 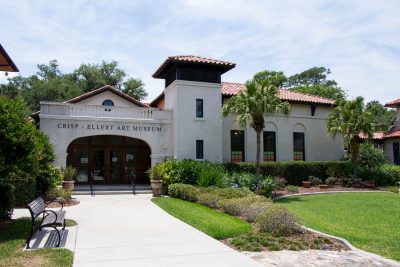 Located on the Flagler College campus, this museum was built in honor of Dr. JoAnn Crisp-Ellert and her husband, Dr. Robert Ellert. The Crisp-Ellert Art Museum offers Flagler College students and the Northeast Florida community a venue for fostering knowledge and a deep appreciation of contemporary art. As an educational resource for the college, the museum exhibits regional, national, and international artists, and provides opportunities for critical engagement and exposure to a variety of exhibitions and personal interactions with visiting artists. 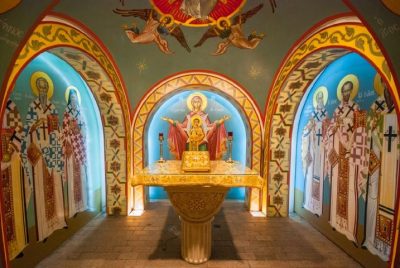 The Saint Photios Greek Orthodox National Shrine is located in the historic Avero House area on Saint George Street in downtown St. Augustine. The shrine is dedicated not only to the memory of the first Greek Orthodox pioneers who arrived in the New World on June 26, 1768, but to all the following generations of immigrants who came to this New World seeking freedom, justice, and a better life for themselves and their children. Today, St. Photios is a sacred, educational center where those of Greek ancestry may celebrate their cultural heritage. The shrine is also a public place where all may honor and remember their own immigrant ancestors. Exhibits and galleries tell about the life of early Greek settlers and the development of the Greek Orthodox Church in America. Visitors can view the shrine’s beautiful Saint Photios Chapel with handpainted Byzantine murals (depicting sacred icons) on the walls and on the domed ceiling. Also on view, the Avero House, originally built after a siege by the English in 1702, and currently restored to its 1730s appearance.