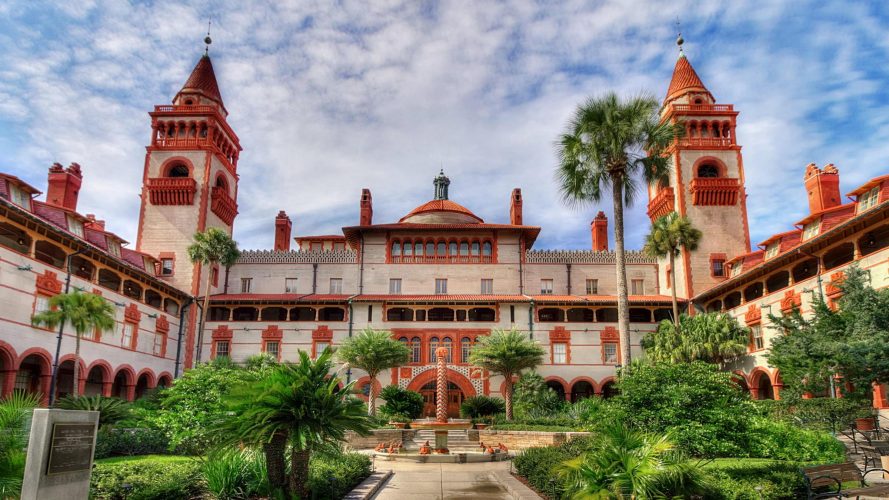 When visiting St. Augustine, it's hard to miss the former Hotel Ponce de Leon. This Gilded Age engineering marvel played a crucial role in the local art and culture community of the Nation's Oldest City.…

On December 1, 1885, oil magnate and railroad tycoon Henry Morrison Flagler officially broke ground on what would become the Hotel Ponce de Leon. The Spanish Renaissance building was constructed of poured concrete, a revolutionary technique used by Franklin Smith’s Villa Zorayda. In fact, Flagler took instruction from Smith and offered a partnership to build the hotel, but Smith could not gather the funds. Instead, he led the construction project and hired a team of architects, designers, and artists to finish the building. The architectural style created by Carrère & Hastings, who later designed the New York Public Library, continued to influence Southern Florida for the next fifty years.

In 1887, Thomas Edison and the Edison Electric Company installed the world’s largest incandescent lighting plant at Hotel Ponce de Leon, also making it the first building in the country to be designed with electric wiring throughout. This new technology terrified some guests, so this is also the first hotel to hire staff just to turn the lights on and off. Louis Comfort Tiffany was tasked with decorating the interior. He installed 79 panels of stained glass windows in the dining room (the largest collection of Tiffany glass in use today), mosaics, terra-cotta reliefs, and commissioned several large murals.

Upon opening in January 1888, the structure was considered an engineering and architectural marvel due to it being the largest structure made of poured concrete at the time, plus modern amenities like electricity, running water, game rooms, private parlors — and of course all of the Gilded Age splendor inside and out. In 1957, the American Institute of Architects recognized Hotel Ponce de Leon as one of the nation’s top 100 most important buildings.

In 1968, Laurence Lewis, heir to Henry Flagler’s fortune, transitioned the hotel to open its doors as Flagler College. The liberal arts school welcomed 160 women to campus, then officially became a coeducational institution in 1971 with its first class graduating in 1972.

Since its inception, Hotel Ponce de Leon has fostered St. Augustine’s artistic and cultural makeup and, on a larger scale, influenced the way Florida is represented to visitors. From the grand murals by George W Maynard and Virgilio Tojetti to the hand-carved wooden pillars, it is no secret that Henry Flagler was a patron of the arts. He continued his support by establishing art studios located at the back of the resort. The colony attracted many emerging artists including Martin Johnson Heade, Albert Fuller Graves, Frank Shapleigh, Emmett Fritz, Felix F de Crano, among other Lost Colony and Highwaymen artists.

Similar to art walks today, the artists would open their studios to share their work with guests who could browse and purchase their collection. Artists would paint Florida’s wild landscape and developments and wealthy tourists from the North would purchase them for gifts or home display. Ultimately, the images they brought back shaped the narrative of Florida’s natural environment and quaint towns — the perfect getaway from the hectic modern life of industrial cities.

Today, the Crisp-Ellert Art Museum acts as an educational resource for Flagler College and exhibits regional, national, and international artists while providing opportunities for personal interactions with visiting artists. Constructed in honor of Dr. JoAnn Crisp-Ellert and her husband Bob Ellert, the museum serves the Northeast Florida community to foster knowledge and appreciation of contemporary art to encourage creativity, critical reflection, and historic consciousness.

In 1999, Joann and Bob moved to what is now Anderson Cottage directly across the street from Flagler’s main campus. Because of their proximity to the college, the couple regularly involved themself with student life by attending lectures and events, plus serving on the President’s Board. In addition to supporting the school financially, the family agreed to donate her studio upon her passing in 2007. Today, Joann Crisp-Ellert’s former studio has expanded to offer 1,400 square-feet of gallery space to display historical and cultural exhibitions and provide resources and opportunities for students and working artists. 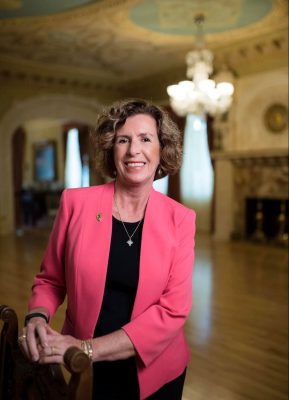 Dr. Leslee F Keys is the director of historic preservation and professor of humanities at Flagler College. The focal point of her extensive research is contemporary and social issues in US history and historic preservation, like the impact rising sea levels have on cultural resources. She has served on local, state, and international level boards in Virginia, Ohio, Kentucky, and Florida, where she continues to oversee Flagler College’s art collection and preservation initiatives.

Since 2017, she serves as a Trustee Emerita of the Florida Trust for Historic Preservation and Trustee for the United States Committee on the International Commission on Monuments and Sites. As if her resume wasn’t impressive enough, Dr. Keys has five publications under her belt including “Flagler College: The First Fifty Years,” “Hotel Ponce de Leon: The Rise, Fall, and Rebirth of Flagler’s Gilded Age Palace,” and “St. Augustine America’s First City.” Leslee Keys is also a recipient of St. Johns Cultural Council’s 2020 ROWITA (Recognizing Outstanding Women in the Arts) Award for her exceptional contributions to arts and culture on the Historic Coast.

Though he experiments with several mediums, Don Martin’s work is primarily focused on printmaking. He finds his subject matter in the environment surrounding his St. Augustine home to create representations of various animal and plant forms that influence his use of lines, texture, and colors. Before retirement in 2018, Martin taught fine art at Flagler College for 40 years while working on his art part-time.

Don Martin’s work has been exhibited throughout the US in Cambridge, Atlanta, New York, and throughout Florida in places like government buildings, Flagler College, University of North Florida, and The Stetson Kennedy Foundation. In 2005, Martin painted 500 feet of large-scale murals throughout the Jacksonville International Airport depicting colorful images of nature, music, and culture. Learn more about Don Martin’s work by visiting his website.