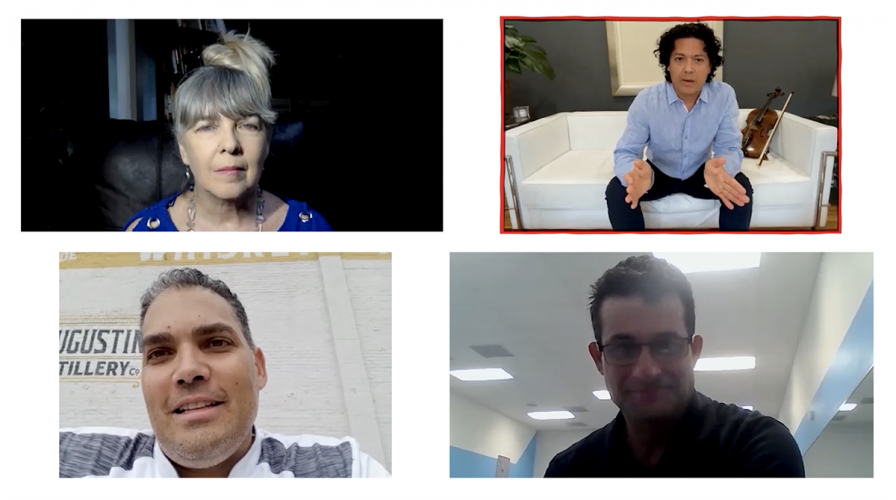 From our distinct architecture to the sights, sounds and flavors you’ll find around the city, Hispanic heritage and cultural influence can be found around every corner in St. Augustine. In honor of Hispanic Heritage Month,…

From our distinct architecture to the sights, sounds and flavors you’ll find around the city, Hispanic heritage and cultural influence can be found around every corner in St. Augustine. In honor of Hispanic Heritage Month, we’re celebrating a few of the city’s best artists – Michael Lugo, Marianne Lerbs, Jorge Peña and Luis Abella.

Born and raised in Venezuela, Marianne Lerbs moved to St. Augustine more than 20 years ago and began a successful career as a fine artist and musician. Marianne’s award-winning sculptures and paintings are often influenced by her Hispanic heritage and St. Augustine’s Spanish roots. Her work can be found throughout St. Augustine, Ponte Vedra and the surrounding area. Learn more and see her work at mariannelerbs.com

Renowned chef and entrepreneur Michael Lugo brings his Puerto Rican upbringing, zest for life and Hispanic heritage to everything he does. Using farm fresh, locally-sourced ingredients and inspiration from years of cooking, Michael’s menu at his popular St. Augustine location, Michael’s restaurant, showcases traditional Latin foods with a modern, upscale twist. To book a reservation at Michael’s restaurant, visit michaelssa.com.

Growing up Cuba, Luis Abella received his classical ballet training at the National School of Ballet in Havana before embarking on a successful career as Principal Dancer and soloist for ballet companies across the Americas. Now living in St. Augustine, Luis is the artistic director of the St. Augustine Ballet and owns Abella’s School of Dance. To celebrate his own Hispanic heritage and world cultures, Luis created the International Dance Festival, which brings artists together from around the world. Catch his work by visiting saintaugustineballet.com.

Jorge Peña is a gifted violist and conductor from Honduras. After moving to the United States, Jorge continued his artistic career as a member of the Kennedy Center Opera Orchestra and Jacksonville Symphony Orchestra, and is the founder/artistic director of the St. Augustine Music Festival. He often pays homage to his upbringing and the Spanish culture of the area in the music he plays, the artists he works with and by holding Festival performances in the Cathedral Basilica. Learn more about the St. Augustine Music Festival here.