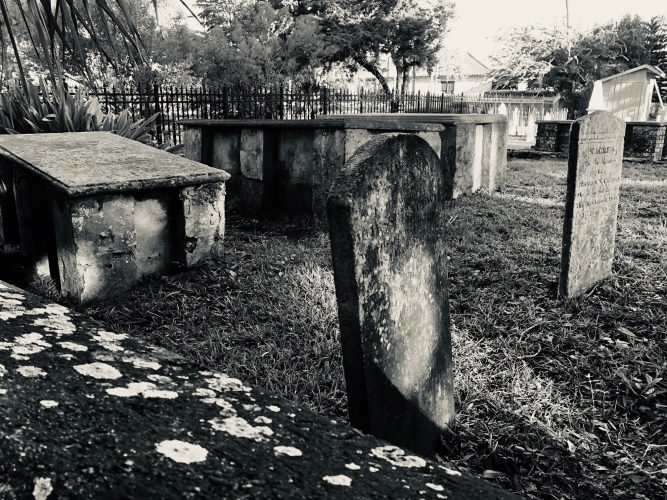 When you’re visiting the Nation’s Oldest City, you’re bound to hear a few ghost stories. Here, we’ll give you a rundown of the history of some of our historic cemeteries plus a tale or two…

When you’re visiting the Nation’s Oldest City, you’re bound to hear a few ghost stories. Here, we’ll give you a rundown of the history of some of our historic cemeteries plus a tale or two of people you may encounter on your nightly stroll.

This one-acre graveyard located in the heart of downtown St. Augustine is considered the oldest cemetery in the state of Florida and is the final resting place of some of the city’s early settlers. Once a native Guale village, the land was designated as a cemetery in the 1700s for local Catholics when the town was under British occupation. The Tolomato served as the parish cemetery for the Cathedral Basilica (who continues to protect and maintain the grounds) for over 100 years until burials ceased in 1884. Over 1,000 people are buried here, though only 100 headstones are present.

Some of the most important historical figures laid to rest at the Tolomato graveyard include the first Bishop of St. Augustine, Agustin Verot, Governor Enrique White from the Second Spanish period, and General George Biassou of Haiti. The first Sisters of St. Joseph also lay here alongside Civil War soldiers from both sides, including Freedmen. Father Félix Varela was a Cuban priest, patriot, and leading professor of his time, teaching philosophy, chemistry, physics, theology, and music.

Varela was an outspoken defender of human rights and argued for equal education opportunities for women. He later published the first Spanish language newspaper in the United States in 1824 called El Habanero. Father Félix was buried here in 1853 and is honored by the small white chapel in the cemetery.

Located just outside the City Gates, the Huguenot Cemetery was established in 1821 as the final resting place for non-Catholic citizens. Not long after its opening, the yellow fever pandemic claimed the lives of many St. Augustine residents. With countless sightings, events, and recorded paranormal activity, the Huguenot Cemetery is believed to be the most haunted cemetery in town with about 436 deceased onsite. and gravestones dating back nearly 200 years.

It is said visitors can see a young girl, estimated to be 14 years old, who was left at the City Gates after dying from yellow fever. Her body was never claimed, but she is known to wave at guests wearing a flowing white gown, usually between midnight and 2 AM.

Perhaps the most famous figure in the Huguenot Cemetery is Judge John Stickney who passed in 1882, just two years before the graveyard closed for burials. The honorable judge left behind two orphan girls as their mother had passed years earlier. Once the children grew up, they made the decision to exhume their father’s body and re-inter him in Washington, DC to be closer to them.

While being exhumed, gravediggers took a break from the brutal Florida heat, accidentally leaving the casket open. When they returned, the Judge’s gold teeth had been stolen. Fearing losing their jobs, the two workers closed the casket and prayed no one would notice. Judge John noticed and he continues to haunt the grounds appearing as a tall dark figure searching for the people who disturbed him or the thief who stole his gold teeth.

This 1.3-acre graveyard has history as an 18th century Spanish Franciscan monastery until British occupation in 1763 when it was converted to the St. Francis Barracks. The Spanish reclaimed Florida in 1783 until 1821 when it became part of the US while the site continued to operate as a military installation. A portion of the grounds was reserved as a cemetery beginning in 1828 with most burials being Indian War casualties while the US forced Native tribes (mainly Seminole) out west of the Mississippi; later burials were Union soldiers. It was elevated to a national cemetery in 1881 and is home to the Dade Pyramids, believed to be the oldest memorial in any national cemetery.

Two prominent monuments sit at the north end of the cemetery: the Dade Pyramids and the Dade Monument. The three pyramids are made of coquina and stand eight feet tall while the Dade Monument is a twenty-foot tall white marble obelisk. The pyramids are dedicated to all casualties of the Florida Wars while the monument honors Major Francis Dade and the 100 soldiers, 7 officers, and 2 civilians who died with him in December 1835 when the Seminole tribe attacked after following them for several days.

Visitors have reported many encounters like orbs, apparitions, and electronic voice phenomena with some of the 1,400 people buried here. Witnesses have seen the ghost of a Civil War soldier walking the yard of the Union Military Hospital across the street smoking a pipe. A shadow of a headless woman has been seen as well and is assumed to be a victim from a 1974 decapitation which took place nearby.

After St. Augustine closed their small urban graveyards due to overcrowding, Evergreen Cemetery was opened in 1886 just outside the city limits. America’s Rural Cemetery Movement stressed that the dead were best honored in a natural, tranquil landscape away from the hustle and bustle of the city which influenced Evergreen’s design featuring winding pathways and garden setting.

Randolph Caldecott was a 19th-century artist and illustrator from Chester, England credited as the originator of children’s picture books. Caldecott’s health suffered from childhood illness which resulted in gastritis and a heart condition. Because of this, he sought warmer climates like the Mediterranean and traveled the US in search of such a place. Caldecott and his wife Marian sailed to New York and traveled to Florida in February of 1886 during unusually cold weather. He was taken ill and died in St. Augustine shortly after at the age of 39.

Caldecott received generous recognition from the Royal Academy and is honored with the Caldecott Medal which awards the most distinguished American picture book for children since its acceptance in 1937. As a tribute to Caldecott’s legacy and contributions to children’s literature, his burial site at Evergreen Cemetery is designated as a Literary Landmark by Friends of Libraries USA.