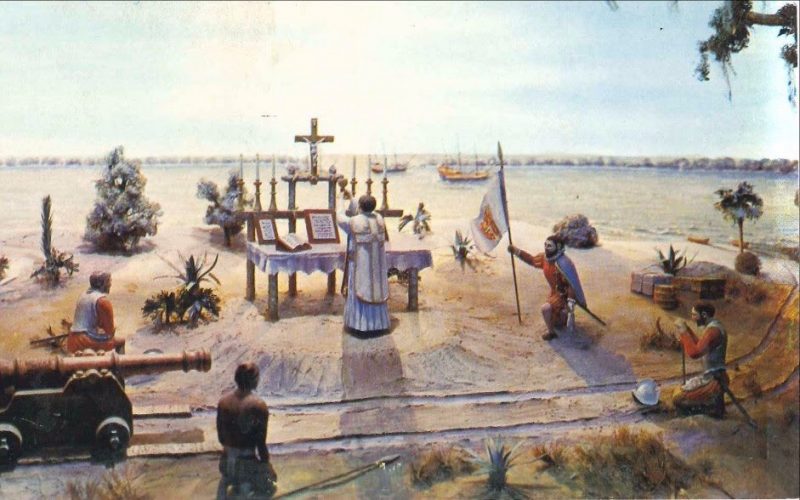 St. Augustine, Florida is the longest continuously inhabited European-founded city in the United States, and many historians have identified the meal following a celebratory mass in September 1565 as America’s first Thanksgiving feast.   When Spanish…

St. Augustine, Florida is the longest continuously inhabited European-founded city in the United States, and many historians have identified the meal following a celebratory mass in September 1565 as America’s first Thanksgiving feast.

When Spanish Admiral Don Pedro Menendez de Aviles came ashore with 800 settlers, he asked that a meal of celebration was served from food provisions on the ship (yes, leftovers!) — cocido, a stew made from salted pork, garlic, and garbanzo beans, accompanied by hard sea biscuits and red wine. He invited the native Americans, the Timucua, from their Seloy village (located where the Fountain of Youth now stands). They would have contributed to the meal from their own food stores — wild turkey, alligator, venison, gopher tortoise, oysters, mullet, drum, sea catfish, maize (corn), beans, and squash.

“It was the first community act of religion and thanksgiving in the first permanent settlement in the land,” wrote University of Florida professor emeritus of history Michael Gannon in his book, The Cross in the Sand.

According to the memoirs of Father Francisco Lopez de Mendoza Grajales, who celebrated the Catholic mass, once “the feast day (was) observed … after mass, ‘the Adelantado (Menendez) had the Indians fed and dined himself.”

This feast of Thanksgiving held on September 8, 1565, in St. Augustine, 56 years before the pilgrims of Plymouth enjoyed a meal together in gratitude of their first harvest.

Some historians argue that while America’s first Thanksgiving indeed took place in Florida, it actually occurred 40 miles further north and one year earlier than the one in St. Augustine when French Huguenots — Calvinists like the Pilgrims — held a service of thanksgiving and feasted with the Timucuans to celebrate the June 1564 establishment of Fort Caroline along the St. Johns River in present-day Jacksonville. “We sang a psalm of Thanksgiving unto God, beseeching him that it would please his Grace to continue His accustomed goodness toward us,” French explorer Rene Goulaine de Laudonnière wrote in his journal.

Other first Thanksgiving claims? A historical marker erected by the Texas Society of the Daughters of the American Colonists outside Canyon, Texas, states that Father Juan de Padilla conducted a thanksgiving service there in May 1541 for an army of 1,500 accompanying Spanish conquistador Francisco Vasquez de Coronado. Virginia and Maine have also put themselves forward as hosts of the nation’s first Thanksgiving in the years before the arrival of the Mayflower.

America’s Thanksgiving holiday was actually first recognized in 1843 by President Abraham Lincoln during the bitter struggle of the Civil War — on the last Thursday in November as a National Day of Thanksgiving, making it a national holiday. The President called on the “whole American people,” wherever they lived to unite “with one heart and one voice” in observing a special day of thanksgiving, and to “implore the interposition of the almighty to heal the wounds of the nation and to restore it … to full enjoyment of peace, harmony, tranquility, and union.”

President Franklin D. Roosevelt set the date for Thanksgiving to the fourth Thursday of November in 1939 and it was approved by U.S. Congress in 1941.

See recipes below from Jonathan Millen’s A Taste of St. Augustine: Recipes of the Ancient City for coquina clam broth, alligator pilau, and swamp cabbage.

This delicate broth is a gift of the sea. The tiny coquina clams burrow into the sand as the tide washes them ashore during the summer months. Once scooped from the sand, rinse the coquinas and place them in a pot with enough water to cover. Cook over medium heat until shells pop open (usually about 5 minutes). Strain broth and discard shells. Add a little butter and light cream to taste. Garnish with chopped parsley or chives to add color. No quantities are given, as the amounts are determined by the success of the coquina collector.

After 53 years of protection, the alligator has made a remarkable comeback and alligator meat is available again. Since the body meat is too tough, only the tail meat is used. The best way to prepare alligator tail is to slice the meat across the grain into 1/4- to ½-inch strips. While alligator tail is delicious lightly breaded and fried, try this dish that includes the datil pepper for a little kick of heat.

Saute alligator meat in a small amount of olive oil until tender, and set aside. In a Dutch oven, cook onions, bell pepper and garlic in remaining oil until soft. Add tomatoes, bay leaves, datil pepper or sauce and seasonings and simmer over low heat for five minutes. Add chicken stock and well-rinsed rice and simmer for 20 minutes. Add the alligator meat, stir well, taste, and adjust seasonings. Simmer an additional five minutes to combine flavors.

If ever the opportunity of a fresh-cut cabbage palm presents itself, here is a recipe for fixin’ it. For most folks, getting to the heart is more trouble than it’s worth. For old-timers and Seminole Indians, it was a way of life. If you want a true Florida adventure, try making it yourself.

Remove boots from the palm and peel down to the heart. Break heart into bite-size chunks and soak in cold water until ready to cook. Chop some onions. Fry ½ lb. salt pork, cut into small pieces, in a skillet. Add a handful of onions and some butter and cook until onions are soft. In a Dutch oven melt a stick of butter. Add a generous amount of cabbage and a fourth as much onion. Season with salt and pepper to taste. Add more cabbage and onion in the same proportion until the pot is half full. Cook over low heat for about 30 minutes, stirring to keep cabbage from burning. Serve when cabbage is tender.

To preserve our trees, please cut cabbages from palms that are growing in dense clusters, or from construction sites where they are to be removed. The best cabbage comes from trees that are from eight to twelve feet tall.