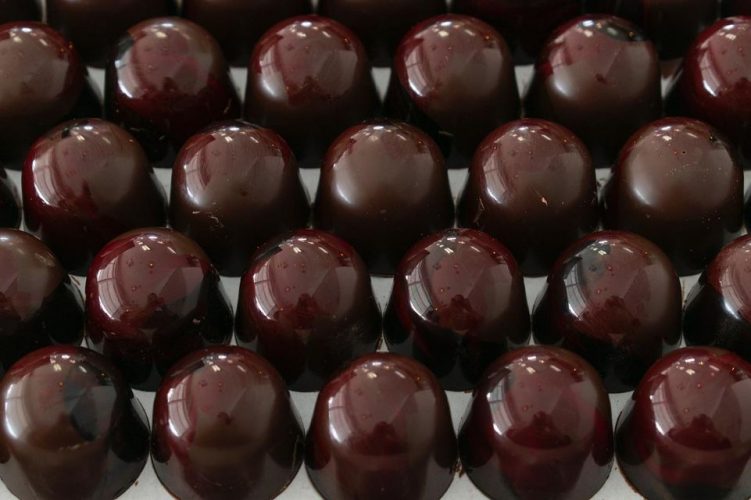 Another St. Augustine first: CHOCOLATE! The first reference to chocolate in North America is from the Spanish ship Nuestra Senora del Rosario del Carmen, which arrived in St. Augustine, Florida with crates of chocolate in 1641. The…

Another St. Augustine first: CHOCOLATE! The first reference to chocolate in North America is from the Spanish ship Nuestra Senora del Rosario del Carmen, which arrived in St. Augustine, Florida with crates of chocolate in 1641.

The word chocolate may conjure up images of sweet candy bars and luscious truffles, but the chocolate of today is little like the chocolate of the past. Throughout much of history, chocolate was a revered but bitter beverage, not a sweet, edible treat.

Chocolate is made from the fruit of cacao trees, which are native to Central and South America. The fruits are called pods and each pod contains around 40 cacao beans. The beans are dried and roasted to create cocoa beans.

There are conflicting reports about when chocolate arrived in Europe, although it’s agreed it first arrived in Spain. One story says Christopher Columbus discovered cacao beans after intercepting a trade ship on a journey to America and brought the beans back to Spain with him in 1502.

Another tale states Spanish conquistador Hernan Cortes was introduced to chocolate by the Aztecs of Montezuma’s court. After returning to Spain, cacao beans in tow, he supposedly kept his chocolate knowledge a well-guarded secret. A third story claims that friars who presented Guatemalan Mayans to Philip II of Spain in 1544 also brought cacao beans along as a gift.

No matter how chocolate got to Spain, by the late 1500s it was a much-loved indulgence by the Spanish court, and Spain began importing chocolate in 1585. As other European countries such as Italy and France visited parts of Central America, they also learned about cacao and brought chocolate back to their perspective countries.

European palates weren’t satisfied with the traditional Aztec chocolate drink recipe. They made their own varieties of hot chocolate with cane sugar, cinnamon, and other common spices and flavorings.

Soon, fashionable chocolate houses for the wealthy cropped up throughout London, Amsterdam, and other European cities.

CHOCOLATE IN THE AMERICAN COLONIES

Chocolate arrived in Florida on a Spanish ship in 1641. It’s thought the first American chocolate house opened in Boston in 1682. By 1773, cocoa beans were a major American colony import and chocolate was enjoyed by people of all classes.

STORY COMPILED BY EXCERPTS FROM:

Formally known as The Chocolate Turtle, ChocoLattes is the sweetest spot downtown, located next to Scarlett O’Haras!

Henry & Esther Whetstone started Whetstone Chocolates in 1967 with 13 flavors of handmade fudge and an assortment of hand-dipped chocolates. In addition to a wide variety of Whetstone chocolates, they offer St. Augustine’s “Original Chocolate Tour” where guests are introduced to the history and making of chocolate and the Whetstone story. A 4-tiered tasting distinguishes the characteristics of dark, milk, and white chocolate, cocoa nibs, and more.

Since 1940, Melli Chocolates has handcrafted chocolates and candies in Wisconsin. Now, a new generation of confectioners has brought their culinary tradition to St. Augustine. Melli Chocolates mixes up hand-dipped chocolates and candies in small batches to ensure optimum freshness and quality. Visitors can find a wide array of chocolate-drenched fruit and nuts, toffee, caramels, creams, truffles, and chocolate bark — all made with only natural ingredients, without preservatives.