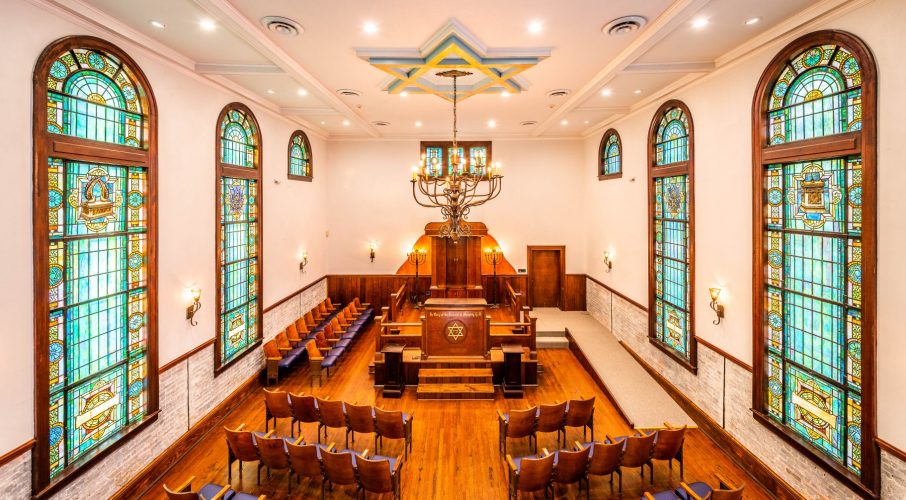 In 2003, Governor Jeb Bush declared January Florida Jewish History Month to recognize and celebrate the contributions and achievements of Jewish Americans to Florida’s culture, history, and heritage. Researchers have found evidence that suggests Jews arrived in St. Augustine with Pedro Menéndez de Avilés in 1565, putting them amongst the first settlers.

In 1513, Juan Ponce de León claimed Florida for Spain and, due to the Edict of Expulsion enacted just 73 years before, Judaism could not be practiced. It is speculated that some of St. Augustine’s earliest settlers were “Marrano” Jews who converted or were forced to convert to Christianity to escape persecution but continued practicing Judaism in secret.

Researchers from the St. Augustine Jewish Historical Society found the names of five “conversos” on Pedro Menéndez de Avilés’s ship that came to St. Augustine in 1565, one being Harbor Pilot Antonio Martinez Carvajal. “Conversos” is a term that refers to Jews in Spain or Portugal who converted to Catholicism, particularly during the Spanish Inquisition.

When England returned Florida to Spain in 1783, Jews were allowed to remain in the territory due to a need for settlers. A 1783 census ordered by Spain reveals a man named David Moses operated a hide store in St. Augustine.

In 1820, just one year before Florida joined the United States as the 27th state, Moses Elias Levy began purchasing 100,000 acres of what would include Volusia, Alachua, and St. Johns counties and organized the first development corporation in the state of Florida. He went on to build “Pilgrimage Plantation,” publish abolitionist plans, and serve as the territory’s first education commissioner.

His son, David Levy Yulee, studied law in St. Augustine, Florida, where he would continue to practice after admission to the Bar in 1836. Considered the “Architect of Statehood,” he was elected to the Florida Legislative Council in 1837, helped to write the state’s Constitution the following year, elected Florida’s first US Senator in 1845, the first of Jewish ancestry to serve in the US Senate (1845-1851, 1855-1861), and organized the first cross-state railroad in 1853. Levy County and the town of Yulee in Nassau County are named in his honor.

The First Congregation Sons of Israel is St. Augustine’s oldest synagogue located at 161 Cordova Street. In the late 1800s, the congregation’s first families arrived in St. Augustine from Russia and Eastern Europe. Under the leadership of Rabbi Jacob Tarlinsky and his wife Dora, the synagogue was officially dedicated in 1923 and the first service took place on March 30, 1924.

The sanctuary was designed by one of Henry Flagler’s architects, Francis A. Hollingsworth, in the Mediterranean Baroque style. Hollingsworth was one of St. Augustine’s most prolific architects in the early 20th century and his work can be found all over the city. He reconstructed the St. Francis Barracks, built the Exchange Bank Building — St. Augustine’s only skyscraper — on Cathedral Place, and the three Florida East Coast railway towers, now occupied by Flagler College.

The sanctuary’s beautiful historic stained glass windows date back to 1873 from a synagogue in Atlanta and were installed in 1958 by Tarlinsky’s three daughters.

In 1964 during the height of the Civil Rights movement, Dr. Martin Luther King, Jr. was arrested on the steps of the Monson Motor Lodge for asking to be served at the whites-only hotel restaurant. He was taken to the Old St. Johns County Jail where he wrote to Rabbi Israel Dresner of New Jersey, encouraging rabbis to assist in the St. Augustine movement.

On June 18, St. Augustine was the stage of two crucial moments in Civil Rights history. At the Monson Motor Lodge entrance, sixteen rabbis prayed after being refused service in the hotel restaurant. Owner James Brock reportedly pushed the kneeling rabbis toward police to be arrested. This resulted in the largest mass arrest of rabbis in US history to this day.

Seven minutes later, the infamous incident of Brock pouring muriatic acid into the pool with a small group of protestors would occur. The image of horrified swimmers would make global headlines, influencing lawmakers to vote in favor of the Civil Rights Act of 1964. President Lyndon B. Johnson signed the act into law on July 2, 1964.

The St. Augustine Jewish Historical Society commemorated this event on June 18, 2019 with a plaque next to Dr. King’s arrest site at the Hilton Garden Inn Bayfront, the site of the former Monson Motor Lodge.  Each year, the mass arrest is commemorated here with a reading of “Why We Went,” a joint letter written by the rabbis arrested for protesting racial segregation, discrimination, and violence.

Formed in November of 2011, the St. Augustine Jewish Historical Society is a non-profit organization founded following a conversation with the St. Augustine Archaeological Association to discuss the possibility that hidden Jews came to the city with Pedro Menendez’s fleet in 1565.

Its mission is to promote greater knowledge and understanding of the Jewish experience in St. Augustine within a cultural context of the city’s founding. The historical society frequently hosts presentations by scholars, historians, archaeologists, and genealogists who discuss topics of exile, religious heritage, lineage, and more.

On January 19, 2022 at 1 PM, the St. Augustine Jewish Historical Society will explore the history of the First Congregation Sons of Israel at the synagogue’s sanctuary at 161 Cordova Street. To learn more and participate, click here.

While there are no kosher restaurants in town, Chabad Jewish Center of St. Augustine offers Fraidy’s Kosher Catering for Jewish travelers. All foods are under strict kosher supervision, including meats and dairy.

Orders must be placed 48 hours in advance. Proceeds of this service will be donated to the Chabad Jewish Center of St Augustine.