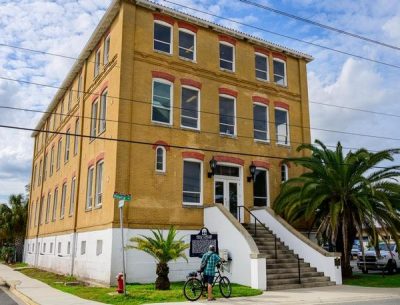 Architect Fred A. Henderich was a prominent designer in St. Augustine known for introducing the Mediterranean Revival style to St. Augustine at the turn of the 19th century and pioneering restorative architecture on many buildings after the great fire of 1914. In 1908, he designed what would be the final remnant of St. Augustine’s cigar industry: the Solla-Carcaba Cigar Factory. The top three floors were designated for cigar making while the ground floor was for tobacco storage.

Since the 1830s, St. Augustine had established a minor handmade Cuban cigar manufacturing industry. When the Ten Years War with Spain broke out in 1868, some Cuban immigrants made their way here while others went to Boston, New York, Philadelphia, Key West, Tampa, and Europe.

P.F. Carcaba was a native of Spain and cigar manufacturer out of Cincinnati who opened a St. Augustine factory in 1893. The first plant burned down in 1895 and a vacant school building was offered to keep production going. Carcaba was one of St. Augustine’s principal cigar producers, making about 5,000,000 cigars a year by 1905. President Theodore Roosevelt visited that year and was gifted three boxes of Carcaba’s cigars wrapped in velvet, trimmed in gold, and fastened with silver clasps.

After Carcaba’s passing in 1906, business moved to Tampa and St. Augustine’s industry took a major blow. The St. Augustine Board of Trade began negotiations to reestablish a local cigar factory to employ 100 workers and money was raised by public subscription plus donations from banks, labor establishments, and investors to construct the building by February of 1909. The factory opened but could not meet the 8 million annual production rate stipulated by the agreement. With that, optimism faded and assets were purchased by Pamies-Arango & Co. The firm was able to increase production and jobs, making cigar production St. Augustine’s second largest industry (behind the FEC Railway) by 1920. After World War I, cigarettes became more popular with aggressive marketing and the newly fast-paced lifestyle associated with cars, planes, and jazz. By 1937, only three cigar manufacturers remained in St. Augustine and Pamies was reduced to a small operation running out of the owner’s home.

Today, the historic building is listed on the National Register of Historic Places and operates as office space for local businesses. Plans for repurposing the building as an upscale boutique hotel were recently announced.