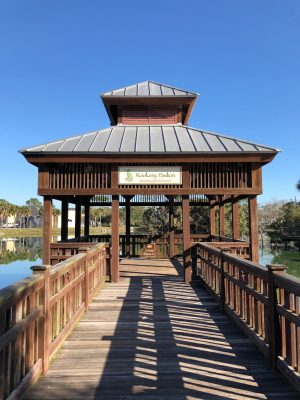 Features
Bird Island Park features an entrance gazebo, followed by a winding trail that leads park guests past water features and examples of the native hammock. Visitors will enjoy a hedged sea turtle maze with four beautifully crafted benches in the center. The park also features a storytelling area with benches and a small stage with a labyrinth center enhanced by shade trees. There is a boardwalk that surrounds the pond with Bird Island in the center, a second gazebo on the waterfront, a play area for the children, and a handicapped-accessible sidewalk the winds around the entire park.

History
Bird Island Park began when a handful of Ponte Vedra residents sought to have a local park built in the community. The residents worked with the County to identify the vacant piece of land between the Ponte Vedra Beach Branch Library and Fire Station 10. The County set aside some money for the park, but the community was asked to raise the majority of the necessary funds. A non-profit 501c3 organization was formed, and the volunteer Board of Directors raised more than $400,000 in seven years with the assistance and support of numerous businesses and individuals. On December 16, 2008, the Bird Island Park Board of Directors officially presented their funds to the County Commission, who then began construction of the park in early 2009. The dedication and grand opening of the park was October 15, 2010.