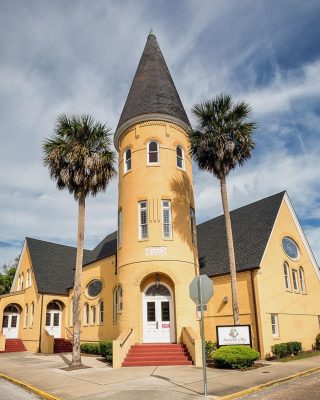 Ancient City Baptist was first organized in January 1887 and its 18 charter members met in the Armory of the original Genovar Opera House.

In 1894, Henry Flagler agreed to give the congregation a prime lot worth about $5,000 under the condition that the church was built within two years, cost no more than $10,000 debt-free, the property could never be mortgaged, and a bell never hung in the tower.

The church was completed in April 1895 and is believed to be the oldest surviving church meeting structure on Florida’s East Coast. It was renovated in 1953 and again in 2003 when a group led by retired glass craftsman Dee Tarrant repaired the original stained glass windows and designed new matching windows where needed.